I enjoy exploring lesser know area in and around popular spots. It’s exciting to find a sot that is often overlooked by other photographers who have tunnel vision and feel they must concentrate all of their energies on a specific location or subject. Case in point, Ricketts Glen State Park in north central PA has some of the most amazing waterfalls in the Mid Atlantic. In fact you can visit well over 30 falls in the course of a 4 or 5 mile hike. I have returned to this location at least a dozen times over the past few years to hike the falls circuit and shoot new images. On a recent trip however, I decided to focus my attention on a few other spots just north of the main section of the park. For two days I camped and explored a great meadow filled with bracken ferns, maples and birch. I can only image how awesome this are will be come fall and I am planning to make a stop there on my way back from Vermont this October. 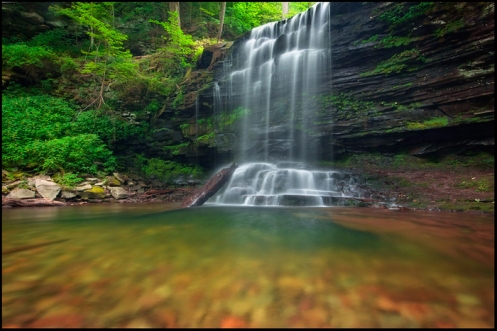 From last weeks waterfall hike in the Glens Natural Area, Ricketts Glen State Park, PA. The water levels were exceptionally low and although I did the entire circuit hike I was only inspired to shoot a total of 3 compositions. Either way I am pretty happy with my keepers!

Improve your craft and expand your creative vision with Adventures in Light eBooks!! Learn More! 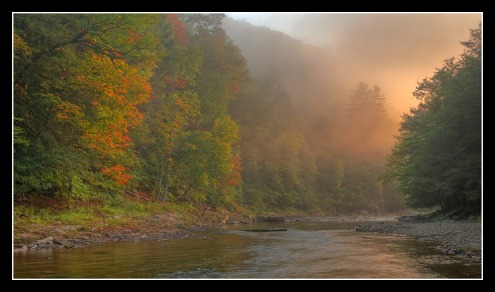 Just checking in from the road! I am currently in northeast PA shooting in the Endless Mountains region. Fall color is just beginning with some nice color displays in the high meadows, swamps and ponds. Here are a few images from the first 2 days of s…hooting. I will be up here untill Saturday night and then back home. Clear blue skies right now, so I am hunkered down doing some work until I head out for sunset. 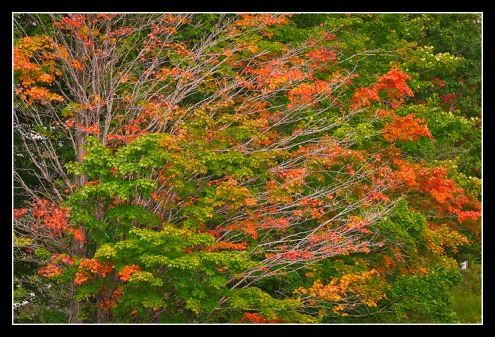 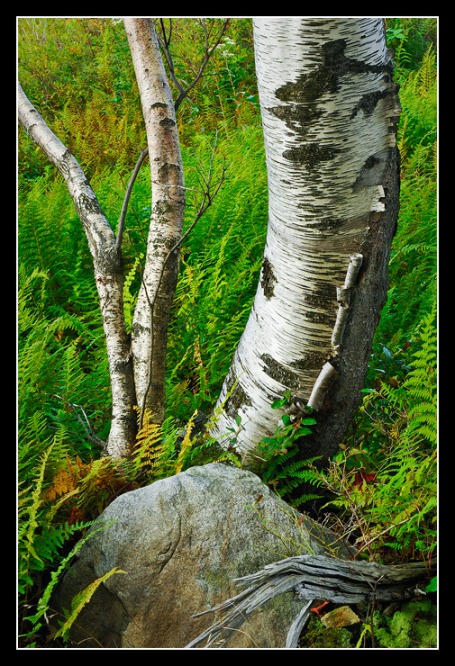 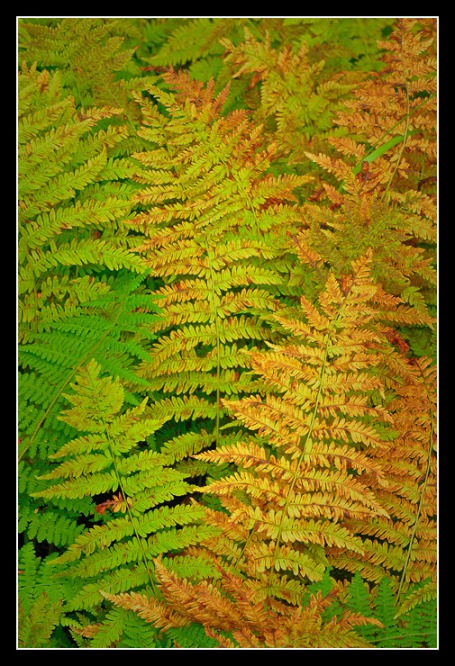 Winter Waterfalls in the Endless Mountains

Just returned form 3 days of hiking and shooting various waterfalls and winter scenes in the Endless Mountains Region of Northeastern Pennsylvania. The temperatures were very cold, 5 degrees before windchill on the first morning shoot and barley creeping into the upper teens during the days. I spent my time hiking to waterfalls in Rickets Glen State Park, State Game Lands and the Loyalsock State Forest. It was awesome and although there was not as much snow as I have experienced in the past, the cold freezing temps created some amazing ice formations along the falls, streams, creeks and lakes. Here are selection of images from the shoot with some stories to accompany them. 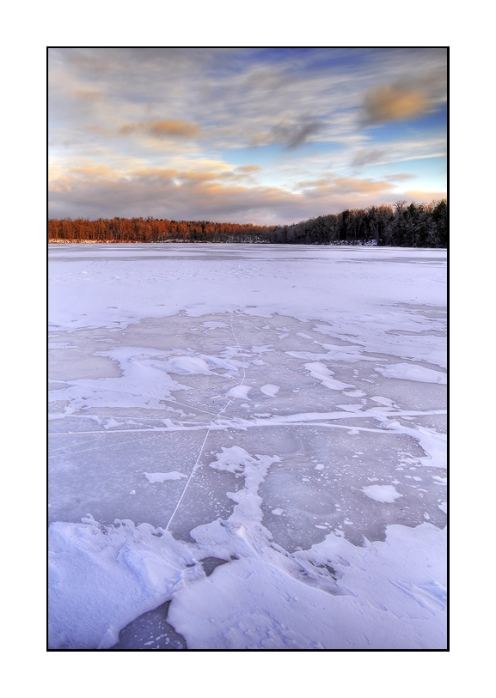 I picked Lake Jean, located in Rickets Glen State Park, for the first sunrise shoot of the trip. Arriving at the lake, the temps were in the single digits and fierce wind was wiping across the lake dropping the temps well below 0. After hiking along the edge of the lake in the pre-dawn light, I found a section of ice about 30 yards from the shore that I thought would make for a great foreground. The light was beginning to change, so I quickly readied my gear and carefully made my way out on the frozen lake. To my surprise, about 15 yards out the ice completely broke and fell up to mid thigh into the freezing water. I managed to pull myself out and still make it to the exposed ice for a few shots. I worked quickly as I was wet and my pants, boots and socks were beginning to freeze. I stumbled back to the car and quickly changed gear ( I always carry back up ski pants, thermals, winter hiking boots and socks in the car). I warmed up in some time and managed to recover my spirits as I still had miles of hiking and lots of waterfalls to shoot that day. 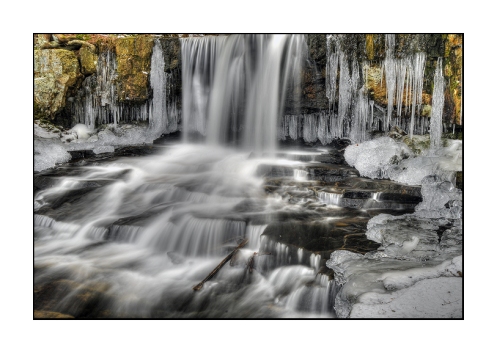 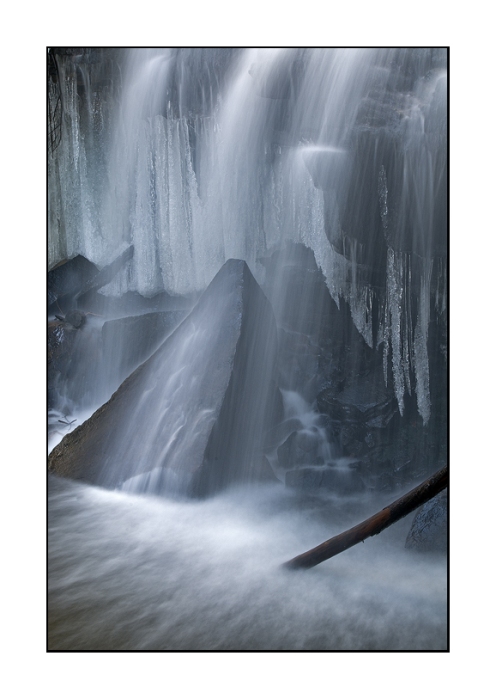 At the base of Dutchman Falls 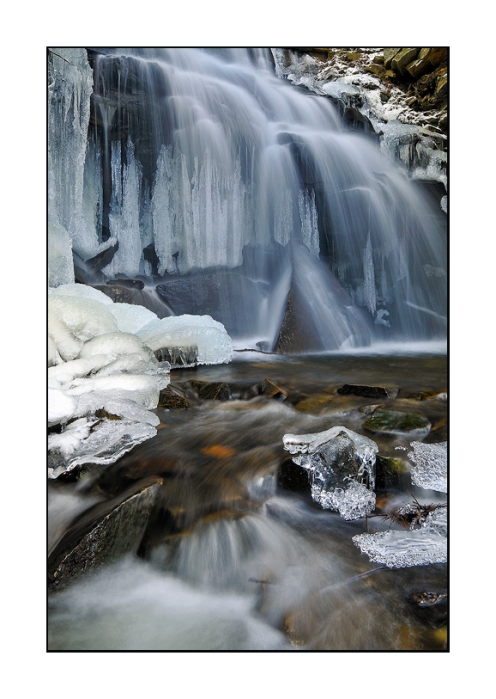 After finishing up at Lake Jean, I drove over to the trail head of the Loyalsock Trail. I would end up spending the remainder of the day shooting and hiking the Loyalsock. This first set of images were recorded only 1 mile into the hike at Dutchman Falls, a beautiful set of falls that drop right into the Loyalsock River. I spent about 3 hours shooting various compositions at the falls. I did have my crampons with me for this adventure. The rocks surrounding the falls were covered in neck breaking ice and I hate shooting waterfalls from the side of the stream. I like to get right down in the action, the middle of the stream that is. The crampons saved me from breaking any bones on a remote trail in the middle of nowhere PA. 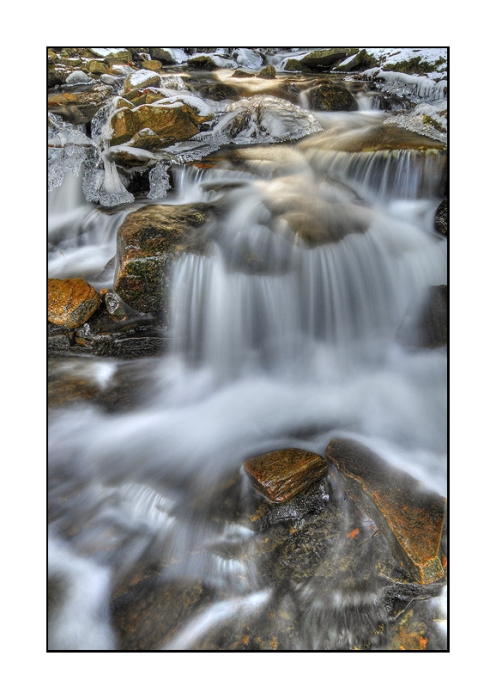 Cascades dropping into the Loyalsock River 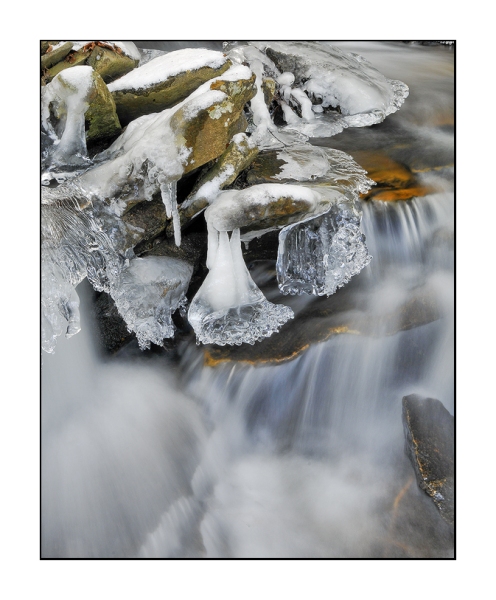 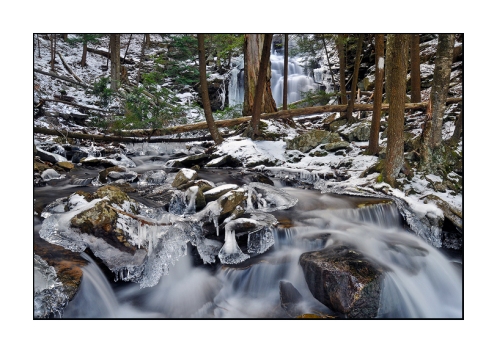 Dutchman Run at the confluence with the Loyalsock River

A few more from Dutchman Run. What an amazing place in the winter! 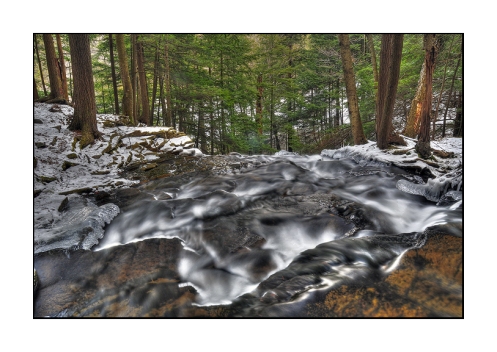 A Mountain Stream makes the big drop towards the Loyalsock River. 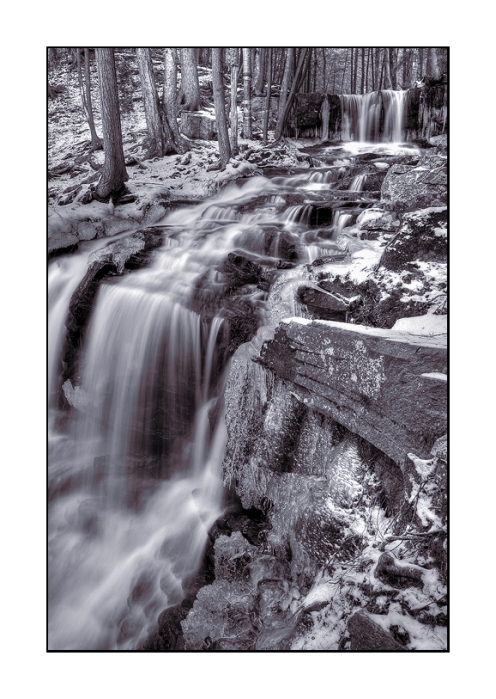 Mountain Stream in the wilds of the Loyalsock Back-country

After spending many hours on the trail and being completely worn out from fighting the elevations gains, frozen waters and cold, I decided it was time to head back to the trail-head and finish up for the day. I was in need of a warm meal and good nights sleep. 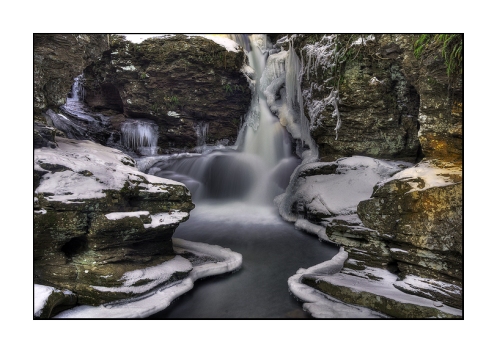 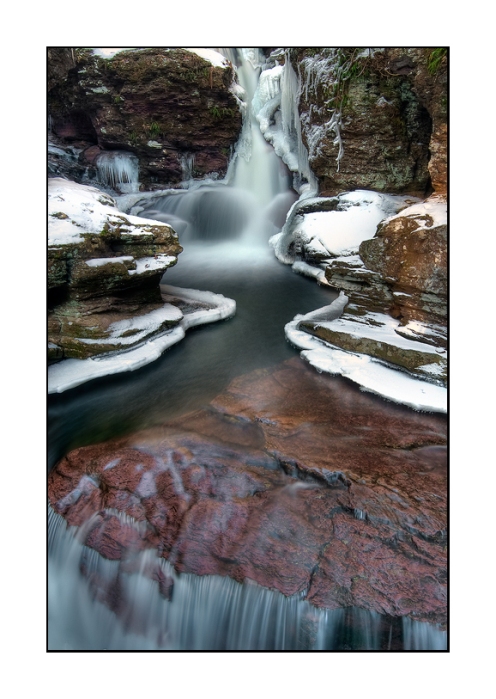 After stepping out of the hotel room, I noticed the skies were absolutely and completely clear, not a good deal for dramatic images. I decided to blow off my first choice of sunrise from High Knob and head back into Rickets glen to shoot Adams Falls while it was still in the shade. I was able to spend about an hour shooting before the sun made its way into the chasm and ended the good light. The rest of the day was spent scouting, writing and hiking various trails in the area. I like to spend my time on bright afternoons scouting new locations, taking notes and just enjoying being outdoors. When the light isn’t right, we scout it out. 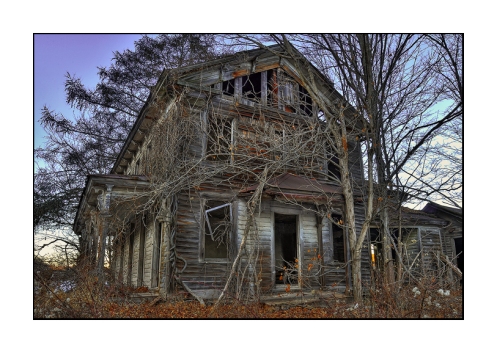 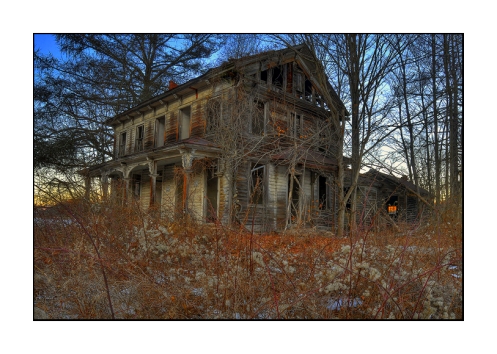 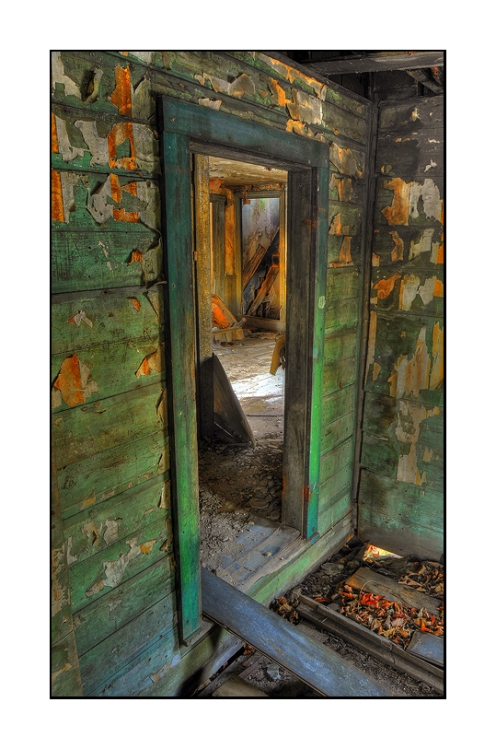 In the Waiting Room

During the day while scouting and driving back roads, I came across this house. I was immediately struck with the delicate design and character of the old home. I decided this would be my twilight shoot and I returned at the edge of sunset. Because of the range of light, I bracked 5 shots a 1 stop each and processed it in Photomatix and finally in Photoshop for the finishing touches.

The last day was spent shooting a few more waterfalls and winter woodland scenes in Rickets Glen State Park and the surrounding vicinity. Here they are. 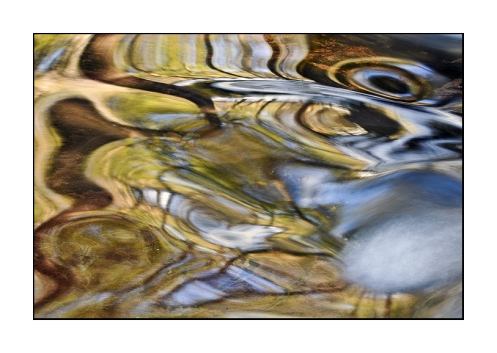 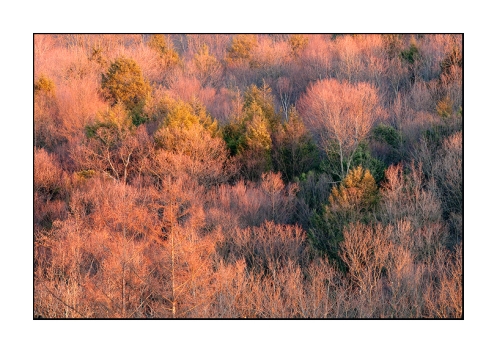 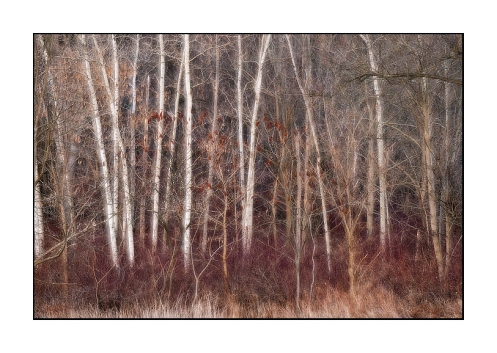 That’s it for now. I have a few more images that I have not yet had time to process and I will be back in a few days with a few more images. Look out for new images from the mountains of West Virginia next week. I will be down there shooting and leading a photo workshop this week. The weather is calling for snow showers and freezing temps, I can’t hardly wait. Good light! Joe